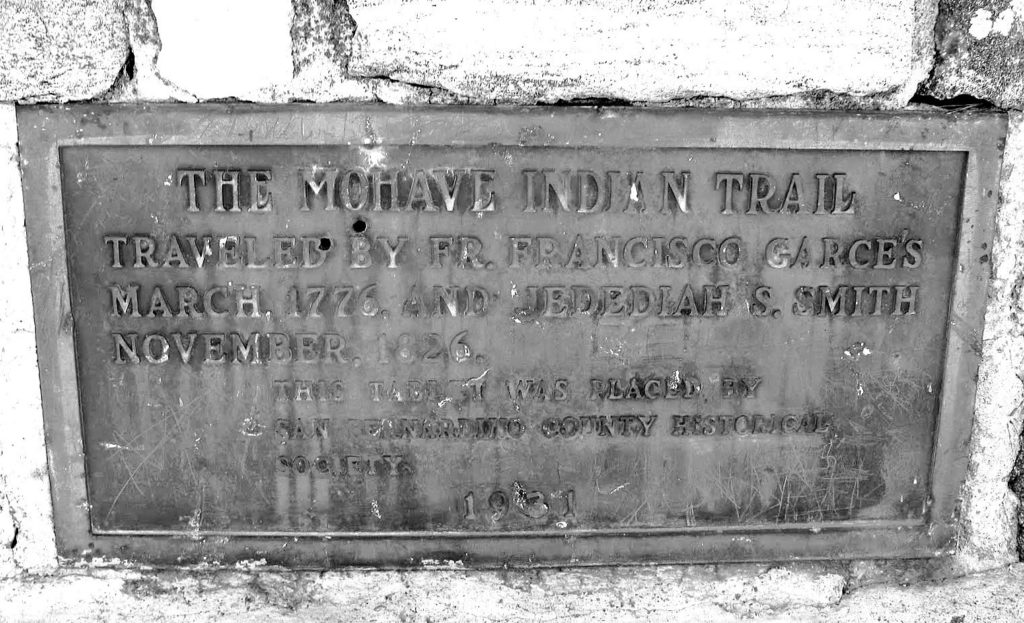 TITLE: Father Garces Expedition: This week’s image is a photo of a tablet dedicated in 1931 to the travels of Father Francisco Garces and Jedediah Smith. The plaque, placed by the San Bernardino County Historical Society, is located on Monument Peak. Garces was born Francisco Tomas Hermenegildo Garces on 12 April 1738 in Spain. He was a Spanish priest and Franciscan friar who became a missionary at an early age. Garces traveled extensively in Sonora, Arizona and California as those areas are now known in the New World. Father Graces went on five expeditions from 1768 through 1776. His last expedition, 1775-1776, took him through the San Bernardino Mountains. During the month of March 1776 Father Garces, accompanied by several Mojave Indians, traveled from the Colorado River to the mission at San Gabriel.

Based upon distances traveled, landmarks and stopping points it appears that Father Garces traveled up Sawpit Canyon on 21/22 March 1776 with his diary entries of “entering a canyon of much wood, grass and water; I saw many cottonwoods, alders, oaks, very tall firs and beautiful junipers.” After reaching the summit Father Garces was able to see the ocean and named the valley below – Valle de San Joseph. He is considered to be the first white man to visit the San Bernardino Mountains.

After continuing down the western side of the mountains near Devils Canyon Father Garces connected with the well-known Anza trail which took the Father and his party to Mission San Gabriel. One might wonder why Father Garces and the Mojave Indians did not use Cajon Pass instead of Sawpit Canyon. In the 1700’s there were no wagons, horses or automobiles. Travel by the Mojave Indians was by foot using the most direct route.

In July of 1781 there was an Indian uprising along the Colorado River. During this period Father Garces was slain along with several other clerics. His remains are buried in Tubutama, Sonora, Mexico.

We use cookies on our website to give you the most relevant experience by remembering your preferences and repeat visits. By clicking “Accept All”, you consent to the use of ALL the cookies. However, you may visit "Cookie Settings" to provide a controlled consent.
Cookie SettingsAccept All
Manage consent