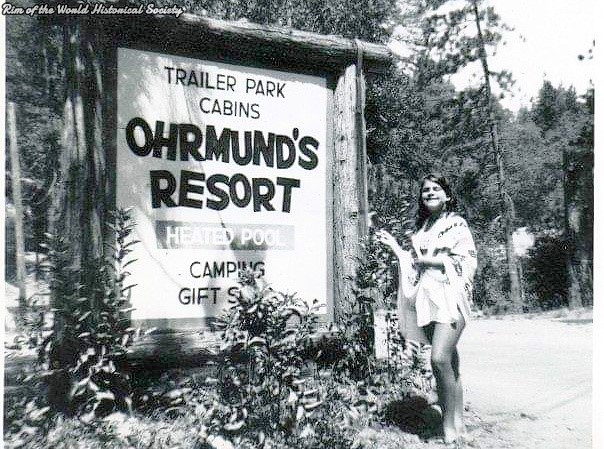 TITLE: OHRMUND’S RESORT WAS CRESTLINE’S PLAYGROUND: For over 40 years there was a trailer park, billed as a family resort, located in Valley of Enchantment. It was started by Frank and Norah Ohrmund in the late 1940s. When Frank Ohrmund’s health began to decline the couple put the resort up for sale. Mike and Mickie Hocker were enjoying their vacation at Ohrmund’s, and when they heard it was for sale went into partnership with their friends Jack and Jo Sutton and bought it in the summer of 1958. Jack Sutton had the vision and saw the trailer park becoming a wonderful place, especially for kids. There were spaces for 40 trailers, had five housekeeping cabins, and a handful of campsites. There was a swimming pool, a snack bar, gift shop, a large recreation area, and a stream. Eventually there would be a penny arcade, a volleyball court, along with rustic touches such as a log swing that held 14 people. Behind the snack bar would stand a Wurlitzer jukebox. It tended to be played all day but was required to be turned off at 9:00 p.m. It took the two couples several years of toil to get the place to where they wanted it to be. After hiring a lifeguard and a couple neighborhood teenagers, to perform general maintenance, Ohrmund’s Resort was opened. The season ran from the Memorial Day to Labor Day weekends. Since there were no other venues in the area for kids to play they were welcome to visit the resort. Days were filled with activities and the resort became so popular that couples returned year after year. The partners sold the resort in 1972, after which time it changed hands for 20 years, eventually being demolished in 1994. The property was sold to the school district. This week’s image is a real photo of the original sign at Ohrmund’s Resort.