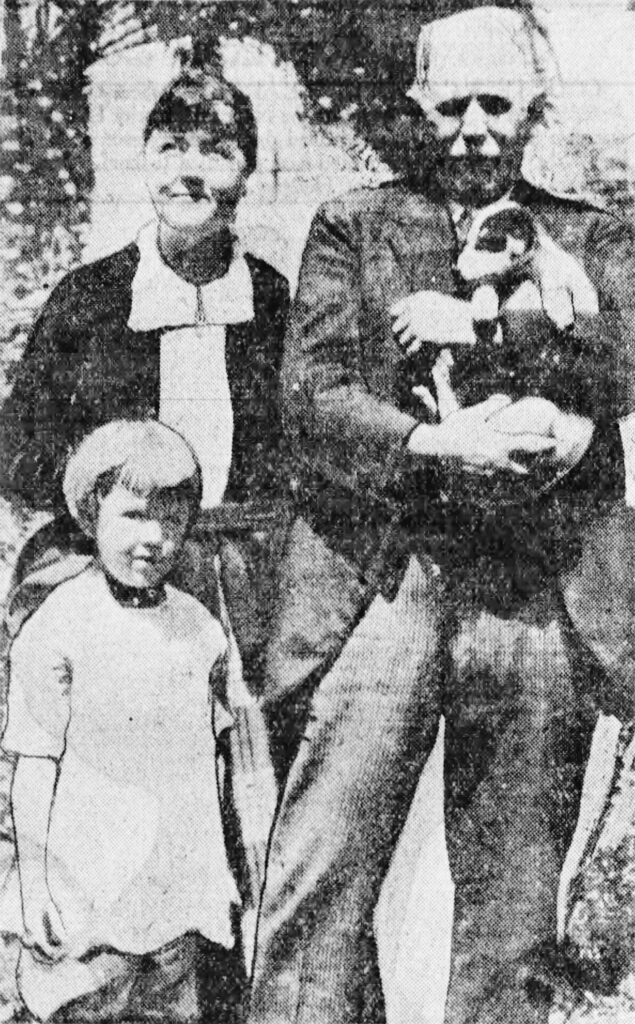 TITLE: RHODA KELTY – EARLY MOUNTAIN HEROINE: This week’s image is a photo of Thomas and Rhoda Kelty and their niece, Meredith Waterbury, aged 5 years. One of the most heroic but tragic events in the mountains was the auto accident in 1924 involving the people in the photo. On Sunday morning, October 19, 1924, the Keltys from San Bernardino and their niece from Hollywood left the city for a day in the San Bernardino Mountains. Driving the road going up the mountains from San Bernardino was a challenging feat in the 1920s. At this time the High Gear Road was still nearly a decade away so the old road was dirt, very steep, narrow, and with no guardrails. On this Sunday the Keltys and their niece never returned home. For days hundreds of people searched the mountains and the desert on the other side, to no avail. The resorts were checked but the group of three never made it to any of these. On Wednesday the 22nd the Kelty’s sons finally discovered the wreckage of their automobile some 500 feet down in a narrow canyon below the road. It was thought that Thomas had difficulty changing gears and had slipped backward off the road near Oak Flats. Thomas had died some 12 hours after the crash and his wife Rhoda and their niece Meredith were injured and could not move to get help. During the very cold nights Rhoda removed clothing from her husband and herself to keep her niece warm. With no water or food Rhoda cut her own wrists and supplied her blood to provide some nourishment to her niece. After the rescue Rhoda’s injuries were so severe that she died several days later. Meredith survived, grew up, got married, and became a salon owner. Rhoda was 65 years old when she sacrificed her life for her niece.